The festive season is almost upon us and with that the end of another year.

Due to the recent relaxation in COVID-19 regulations, bunker rakes have been re-introduced. Therefore, the local ruling that you may have one club length relief in the bunker no longer applies.

In addition, we are waiting on the replacement of the Ball Washers at the tee boxes, so a return to normality is happening. If you choose to handle the rake, ball-washer or flagstick then please sanitise your hands before and after doing so.

The new stroking is out there and what a pleasure NOT to hear how we have the hardest stroke 18 in the Peninsula. Conversely, it now makes the 17th hole that much more of a challenge for those whose playing handicap is 17 or 16.

As I write this, the Milnerton Open is a few days in the future. I wish all competitors the best of luck.

Your committee and Board of Governors have reached consensus on the proposed fees for 2022. Accounts will go out in the latter part of November.

The exterior painting of the clubhouse and surrounds is, to all intents and purposes, complete. The Caddy-master’s room/office has had the floor tiled, door replaced and panelling added to bring it up to par with the appearance of the recently repainted exterior…..a few minor touches and it will be complete.

Billy O’Brien has single-handedly re-landscaped the garden surrounding the first tee box. It is generally waterwise and should last for quite a few years. Many thanks VC.

Whilst I am thanking people, Friday nights lucky draw in the bar – a huge thanks to Niall Keller for organising this event and presenting it with his usual wit and flair for comedy.

Recent events hosted by the club in the Sunset Lounge were a Rotary FUNdraising Golf day prizegiving as well as the ladies section Christmas Mixed prizegiving. Hopefully we will have more bookings for this stunning venue as the Summer season rolls around. Remember, ONLY R 500.00 hire fee for members.

I wish all members and extended family a wonderful festive season and a healthy and joyous 2022 and you’ll hear from me again in early 2022.

Yours in Millies Golf
Colin (aka Jakes) Jacobs

In 1975 at the age of 12, Mo joined Keith Andersons’ YMCA Circus School, “Circus Osler”. There he trained in the arts of flying trapeze, acrobatics, and circus skills. The circus school students traveled extensively, performing for thousands of people across the country. The Osler students were also the focus of Ashley Lazarus’s feature, “Once Upon a Circus” which explored the antics of kids joining the circus and living out their dreams.”

One of the highlights of my time spent at the circus school was the first Cape Town Festival, during which we performed on a trapeze rig suspended between two buildings on Adderley Street. The rig was seven stories high; it was a memorable experience performing above people eating and drinking below.

At age 16, Mo was chosen a one of thirteen young kids to work professionally in Europe. The troupe became known as the Star Lords and performed in the U.K, Denmark, and France for one year before returning to South Africa. The troupe also toured the USA during 1983 with Circus Vargas. Mo later joined Circus Triberti in Italy where he worked for 6 months. Returning to South Africa, Mo teamed up with Keith Anderson once more to experiment with a new concept in flying trapeze. The troupe toured the USA for two years, 1987/88, where Mo performed the triple summersault daily and with an outstanding success rate. The new look flying act was snapped up by Ringling Brothers Barnum and Bailey Circus. Mo later took this troupe to the Far East, where they performed for a year.

Turning his hand to film, Mo assisted Keith Anderson in training the Upside-Down People for King Solomon’s Mines starring Richard Chamberlain. Together with Anderson, Mo also did stunt and aerial co-ordination for the feature films Survivor and My African Adventure with Dom Delouise.

In 1997, Mo was approached to oversee stunts and acrobatics on the television series, The Adventures of Sinbad. During this period, he was also asked to co-ordinate stunts on the new and revived British T.V. series The Professionals being filmed in and around Cape Town.

His feature film credits include:

Mo is still currently working in the film industry, but his secret passion is golf, unfortunately only started at a very late stage of his life but enjoys the game and the challenges it presents every time.

We welcome the following new members 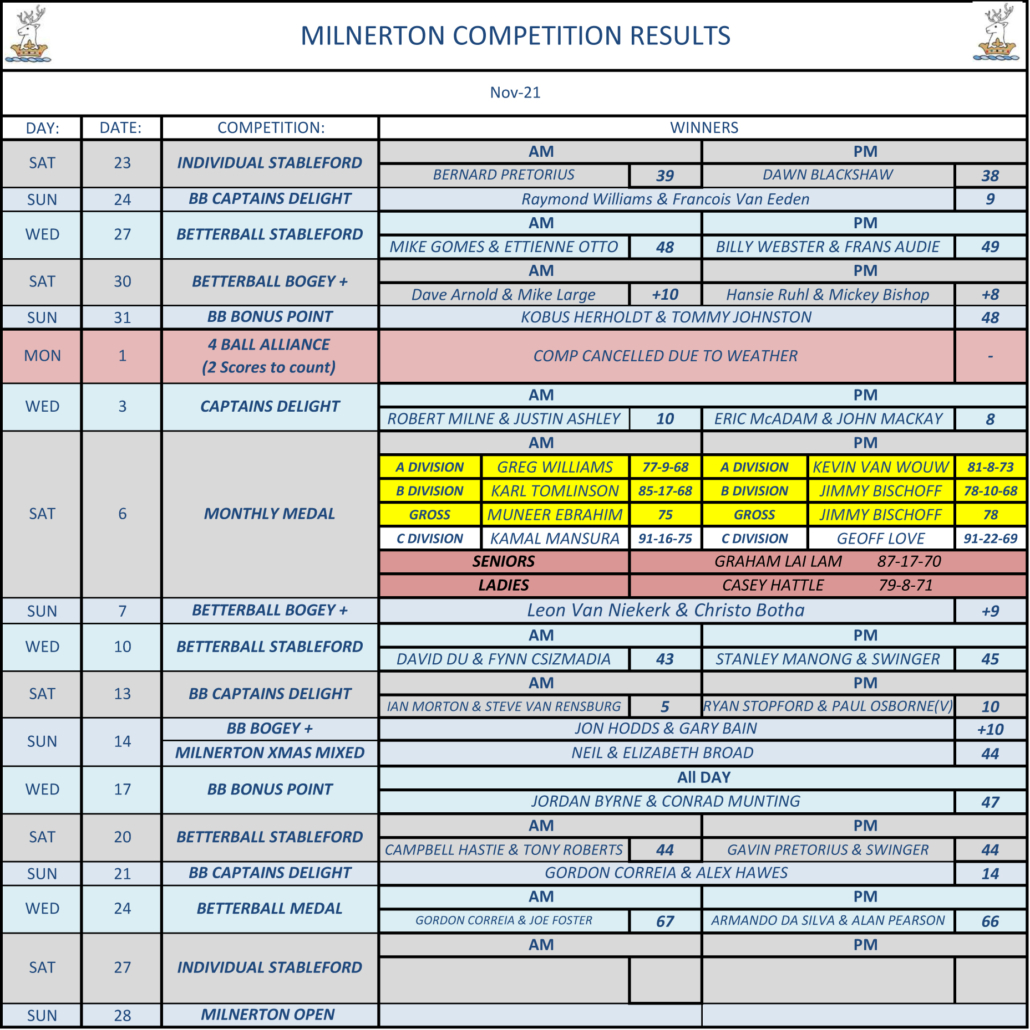 Whilst the end of the year is fast approaching, it’s great to see the continued support from our members both for playing golf and social events. We have only a few more fixtures left for this year and are preparing for our Medal finals which is diarized for the 7 December.

Our last Christmas mixed golf day was held on Sunday the 21st November and was booked out and from all accounts most enjoyable I sincerely thank the club staff. For their invaluable assistance and always be available to help where needed.

Wishing all our members who had some kind of medical complications all the very best and wish them a speedy recovery.

Thank you all again for wearing your masks and adhering to the covid rules.

I always look forward to seeing you at the Golf Club. 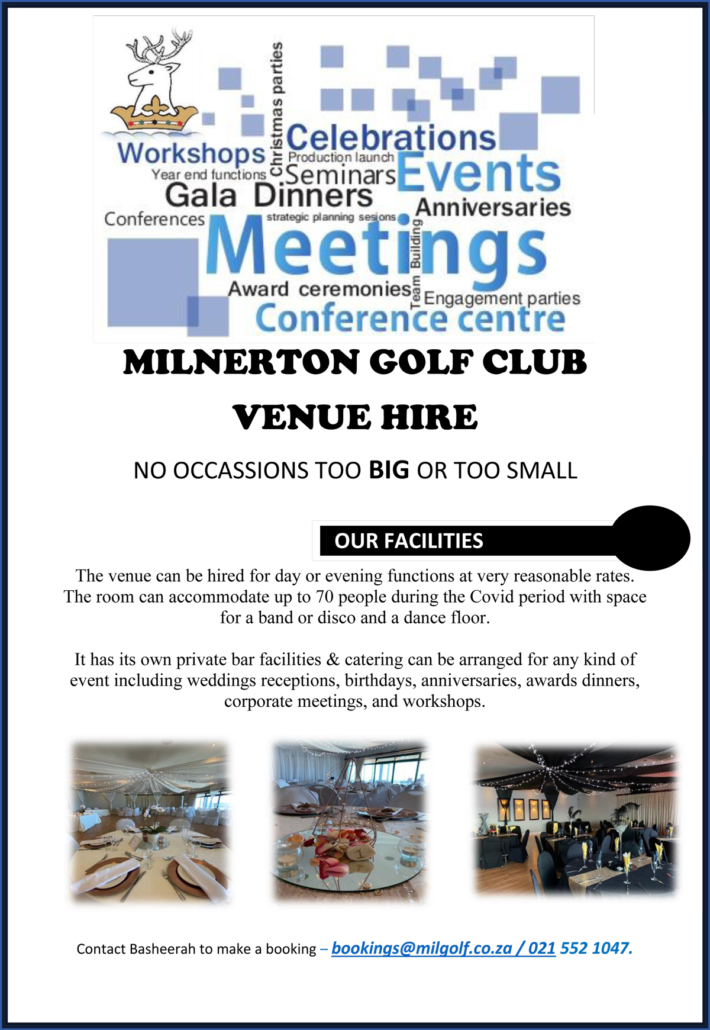 The Premier League was a strange season and probably points to why WP golf seems so strong at the moment. We finished bottom of the log, but at the same time also only 2 points off the top of the log. Unfortunately though being bottom of the log means we have to play a promotion/relegation match on Saturday 4 December vs Royal Cape at Parow Golf Club. We going to have to show we good enough to stay at the top level of WP golf. I’m sure the boys will do the club proud.

The greens have made an almost unbelievable comeback from holotining and are back to being great again. The recent rains have helped a lot in keeping the course looking green. The remodelling of the bunker on the left of the 14th hole is just about complete now. Still some work to be done to get it looking 100%. The new pathways are also complete.

Milnerton Open on Sunday 28 November – good luck to all playing.

Yours in Golf
Garreth Johnston

Stay up-to-date with the latest news.

By continuing to browse this site, you are agree to our policy in terms of the POPI Act.

We may request cookies to be set on your device. We use cookies to let us know when you visit our websites, how you interact with us, to enrich your user experience, and to customize your relationship with our website.

Click on the different category headings to find out more. You can also change some of your preferences. Note that blocking some types of cookies may impact your experience on our websites and the services we are able to offer.

These cookies are strictly necessary to provide you with services available through our website and to use some of its features.

Because these cookies are strictly necessary to deliver the website, refuseing them will have impact how our site functions. You always can block or delete cookies by changing your browser settings and force blocking all cookies on this website. But this will always prompt you to accept/refuse cookies when revisiting our site.

We fully respect if you want to refuse cookies but to avoid asking you again and again kindly allow us to store a cookie for that. You are free to opt out any time or opt in for other cookies to get a better experience. If you refuse cookies we will remove all set cookies in our domain.

We provide you with a list of stored cookies on your computer in our domain so you can check what we stored. Due to security reasons we are not able to show or modify cookies from other domains. You can check these in your browser security settings.

These cookies collect information that is used either in aggregate form to help us understand how our website is being used or how effective our marketing campaigns are, or to help us customize our website and application for you in order to enhance your experience.

If you do not want that we track your visit to our site you can disable tracking in your browser here:

We also use different external services like Google Webfonts, Google Maps, and external Video providers. Since these providers may collect personal data like your IP address we allow you to block them here. Please be aware that this might heavily reduce the functionality and appearance of our site. Changes will take effect once you reload the page.

The following cookies are also needed - You can choose if you want to allow them:

Privacy Notice & Consent to Use of Personal Information
Accept settings